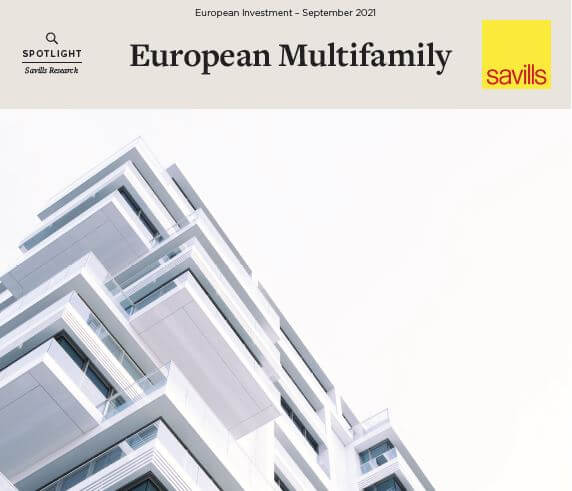 Allocations in the Multifamily sector are increasing in Europe. According to Savills European Research €22.8 billion was invested in the multifamily sector in the first half of 2021, capturing almost a quarter of the total activity. The highest annual increases were noted in Finland, Poland, Denmark, and the UK. Prime multifamily yields are below 3.5% in most of the markets, however, yields on average have stabilized this year. Income streams from residential are characterized by stability and resilience. Prime rents are expected to continue to rise but rental growth is likely to be muted. House prices and rents have been rising faster than incomes over the past five years.

Investors have shown confidence in the defensive characteristics of multifamily increasing their allocations in the residential and launching new funds. In H1 2021 multifamily was again the 2nd largest sector after office. The share of multifamily reached about one third or more of the total investment in Sweden (31%), Spain (32%), Germany (32%), Denmark (34%), and Finland (42%). Total European investment was 18% down yoy, while multifamily was only 2% down yoy.

The demand and supply imbalance have been pushing rents and prices up. Since 2015 the average rise in rents has been 4.6% per annum in the European cities monitored by Savills. The European residential sectors are characterized by limited supply of quality rental accommodation in the major urban centers. Savills estimate further increase in prices, especially in Germany, Netherlands, and UK where rental housing supply lags demand. Most of the residential stock in the major European cities is dated. According to Eurostat in most EU countries half of the residential stock was built before 1970 and requires refurbishment. Sustainable housing is also becoming a priority for investors, as they need to meet ESG standards.

Half of the households live in dwellings completed after 1980 in Finland. Just over a third of the apartments completed in the current millennium are in the County of Uusimaa. Unlike the mainstream in Europe, the stock of non-subsidized rental housing, especially in the Helsinki metropolitan area, has renewed rapidly over the past 15 years boosted by investor-driven construction.

Between 2015 and 2020, the price to income ratio index increased by an average of 24.6% across the markets Savills monitor, reflecting that house prices have been growing faster than incomes. The share of renters increased in most markets over the same period. The long-lasting growth in the number of households has increased living in a rental apartment especially.